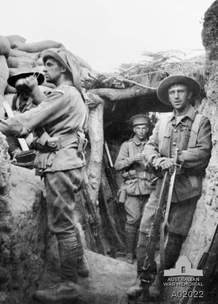 Trench warfare was definitely one of the most terrorizing and difficult parts of the war. The living conditions were extremely unsanitary and contracting a disease may have been easier than finding a good place to sleep. The conditions in the trenches were simply appalling. The varying weather made it no easier to survive. Winters were freezing cold and the rain that seemed to be non-stop only made it worse. When the downfall was really heavy, the low-lying trenches would turn into mud pits, sometimes the water going as high as waist deep. The months of summer brought no reconciliation. The scorching heat, limited sun coverage and trenches becoming infested with rats, lice and flies, and not enough water to go around would have been unbearable.

Advances in technology meant that enemy lines had machine guns that were able to fire 400-500 bullets per minute. This made each battle extremely difficult to gain head in. Thousands of our men with weapons firing everywhere, poison gases killing invisibly and the deaths of fellow soldiers everywhere would have been horrendous. Trench warfare took the lives of many good soldiers, and was in no way an effective way to battle.  Explosions of grenades every day and the fact that it was rapid fire non-stop made advancing in missions extremely difficult. Barbed wire covering the trenches caused many injuries alone, getting infected more often than not.

Life in the trenches

• Lack of fresh water, little to no sun coverage, scorching sun, and the stench of the dead bodies and rubbish in the heat would have been unbearable in the summer.

• The heavy kits that each soldier had to carry, weighing at around thirty kilograms each. While being heavy, these packs also made it very difficult to move quickly.

• The use of mustard gas made the soldiers extremely vulnerable as it is nearly impossible to detect, takes twelve hours to effect and can stay active for three to four weeks. Only a small amount was needed to affect many of the soldiers. Before everyone had a gas mask, many soldiers had to use urine-soaked materials to keep out the deadly gas.

• If the men didn't have duckboards to protect their feet in the trenches they could contract ‘trench foot’.

• The trenches were always waterlogged so without the duckboards they could also sink into the mud and become stuck. This was particularly worse in the winter months.

• There was not enough food to go around for all of the soldiers. Rations had to be made to ensure that no soldier starved.

• Trench toilets called latrines were usually pits as deeps as 1.5 meters deep. Keeping the latrines in good condition was very important. This job was often used as a punishment for breaking army regulations.

• Machine guns were one of the most deadly weapons. They were able to fire 400–500 shots every minute. This made it very difficult to escape a bullet.

• Cuts and grazes caused by barbed wire often became infected in the unsanitary conditions of the trenches.

In the beginning of the war, thousands of Australian men had enlisted themselves in the war. Most had joined the Australian Imperial Force (AIF) or were part of the Australian and New Zealand Army Corps (Anzacs).

Enlisted or Recruited?
The difference between enlisting and recruitment is that enlistment was the soldiers choosing to sign up and fight in the war. Deciding that they wanted to fight for their nation. Many Australians enlisted in the war because they perceived it to be glorious, exciting and heroic. Recruitment is the government officials looking for men to sign up to become soldiers, needing more men to fight in the war. This generally happened with the use propaganda and such convincing practices.

Conscription
Conscription is the act of calling up eligible people for compulsory military service.  The men chosen are required by laws created by the government to participate. Men conscripted into the war could have included men who have already fought there then come home, only to be forced to go back. Conscription was never a popular choice among many people in Australian, however there were still groups that supported the idea. It was mainly politicians who supported the conscript. The Prime Minister at the time supported this idea, therefore leading many other people of the government to do the same. Other people who supported the conscription consisted of middle and upper-class British people, some with Protestant backgrounds.