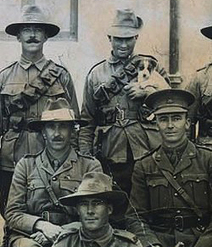 The first Australian Imperial Force (AIF), consisting of over 330 000 soldiers, men and service women, served overseas in the war from 1914 to 1918. The AIF served over in the war, representing Australia and honoring their nation.  Many were sent overseas to fight across a large area, larger than any other conflict that had taken place before. Ranging from the Middle East to the Western Front, Northern Italy to Africa, Russia to the Pacific and from the North Sea to the Dardanelles.

The soldiers in the Australian Imperial Force were mainly sent to fight in the trenches on the Western Front. Many of the men had originally enlisted in the war; however as more and more lives were lost a great deal of the AIF had to be recruited with the help of propaganda. The AIF also included the aid of the Royal Australian Air Force, named the Australian Flying Corps at the time.

It was not only men who were in the AIF. Over 2000 women served overseas in the war, most commonly as nurses. The nurses worked in field hospitals, aiding the wounded soldiers that were brought in. The set up hospitals were generally overcrowded and uncomfortable. Without these women as nurses, many of the soldiers would not have survived, being left for a painful death without medical treatment.

When the AIF was originally formed, it was commanded by General William Bridges. He also was in command of the infantry division in the AIF. After his death in Gallipoli in May 1915, the position was taken over by General William Birdwood who was also commander of the Australian and New Zealand Army Corps (ANZAC). The causality rate of the soldiers either injured or dead was around 65%. Around 60 000 soldiers were killed and over 156 000 were wounded, gassed or taken hostage by other nations. By the end of the war, although many made it home, there were hundreds of soldiers unaccounted for, their bodies never found. There are memorials in most cities around Australia for these soldiers.