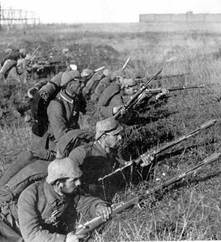 In August 1914, at the start of the war, soldiers of the German empire had marched through Belgium then into France. There was great resistance from the British and the French were able to hold their movements from moving further into France. The resistance seemed strong until the Allies were soon unable to force the Germans back. By the end of 1914, it was down to the Germans and Allies (including Australian troops) to face each other across a deadly line of trenches. This line of trenches ranging from the northern end of the Belgium Coast to the southern end of the Swiss border was now known as the Western Front.

Months of fighting on the Western Front in the trenches and in army raids, there was a great need for new weaponry such as tanks, poison gas and machine guns that were able to fire 400-500 shots per minute. Clever defensive tactics were introduced with the use of barbed wire and heavy artillery that caused rapid war movement on the Western Front. The trenches soon began to turn into just a never-ending series of attacks and counter-attacks. These small attacks made minimum difference, as well as losing hundreds of thousands of lives. There were many attempts to break the series of near pointless and overly bloody attacks, mainly planned by the Generals of each division. This happened between 1915 and 1918, each attack tending to follow a slow pattern. These assaults on enemy trenches failed multiple more times than they succeeded, turning the plans into masses of confusion and chaos amongst the deaths of thousands of soldiers.

Map of the western front

The map below shows the battlefields of World War 1 from 1914 to 1918. The Western Front begins from the northern end of the Belgium Coast to the southern end of Pfetterhouse on the Switzerland frontier. 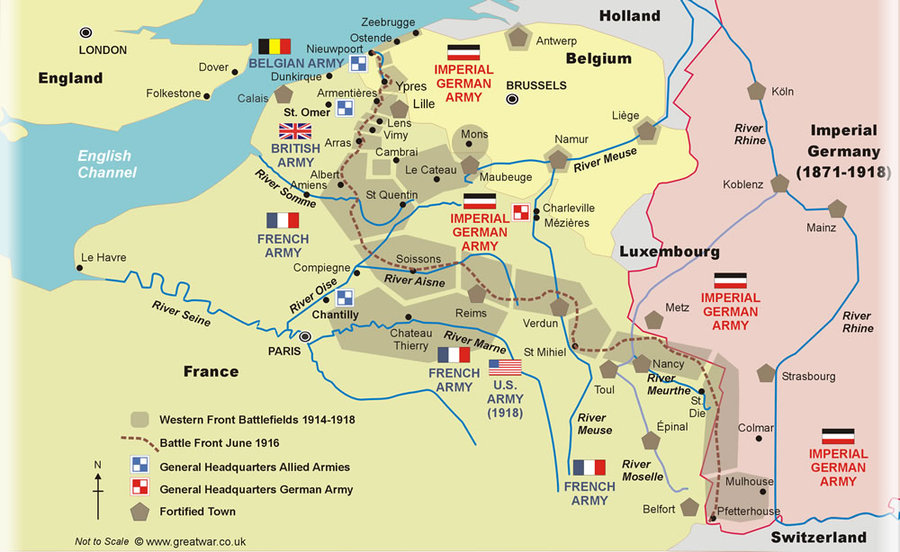 who  fought on the Western front?

Fighting on the Western Front was mainly powered by the French, German and British empires. Part of the British Empire was Australia, who fought alongside New Zealander soldiers. These soldiers were  called the Australian and New Zealand Army Corps, otherwise known as the Anzacs. From fighting in Gallipoli against the Turks and to fighting in the trenches on the Western Front, hundreds of thousands of lives were lost and even more were injured.

The enemies of the Anzacs fought on the Western Front, running tactful campaigns of their own. With the new weaponry and technology being introduced, trenches that were sometimes only 50 meters apart, and the outnumbered soldiers on enemy lines made the efforts of the Anzacs almost seem pointless. France, Germany, Belgium, Hungary, England and all over empires surrounding had involvement in WW1. The trenches were located from Belgium to Switzerland, so basically all places in between would have been either attacked, destroyed, or part of the attackers. There were many hospitals set up for both the Allies and for the German empire, meaning not everybody on the Western Front were there to fight, kill and destroy. Many service women were sent overseas to aid the wounded and dying soldiers in these hospitals.